Ford recently updated its flagship SUV Endeavour in a bid to give it a proper update after 3 years of its second-generation model launch. Just yesterday only I went to my nearby dealership with my friend as he is planning to buy the one. We saw great changes in the newly launched Endeavour which I will briefly point out. But right in the start, I will like to make a point that it doesn't look much different from the earlier model. You have to try a little bit hard to spot the differences. The front bumper has been redesigned along with new triple-slat grille styling and the blackened bezel around the fog lamps. The alloy wheels are different with dua al-tone diamond cut this time but the same size i.e. 18-inch as before. The car gets new Diffused Silver color option replacing the earlier Smoke Grey. Secondly, a manual transmission option which was discontinued in mid-2017 is back again. Thirdly, the car gets the much-needed push engine start/stop button and 8-way power adjustable front passengers? seats. The carmaker has also removed the feature of heated mirrors. Does the carmaker have daddy changes at the rear, however, it has added virtual pedal option through which you can open the boot with just swiping the foot below the bumper. Inside, the car gets a two-tone black and beige dashboard with a chrome bezel around the gear lever. The touchscreen infotainment has also been updated which now comes with Ford?s SYNC3 technology along with Android Auto and Apple CarPlay. All these changes will definitely swing back the prospective customers towards this SUV. The 7-seater vehicle's price starts from Rs. 28.19 lakh and goes up to Rs. 32.97 lakh, ex-showroom. The Endeavour goes against heavyweights such as Toyota Fortuner, Skoda Kodiaq and newly launched Mahindra Alturas G4 in the segment. 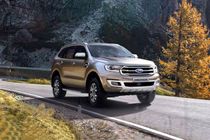