So I own a 2008 model Honda City ZX VTEC - the legendary dolphin model that ruled the Indian streets until there was a massive leap in the automobile industry that crowded the entire premium C-segment with extremely feature-rich and price competitive cars. No wonder, Honda City ZX lost that crown of the best premium C-segment car to its competitors. Well, Honda did reclaim the crown back with the new-gen City but the legend is gone. The original "ZX" is still remembered with the dolphin model. And Honda knows that. The dolphin model debuted at a time when typical three boxes quintessentially defined a sedan that sat very low. And perhaps the only "so-called" affordable sedan was Maruti Esteem which still was a prestige symbol. Well, there was Toyota Corolla too but that was segment above and it still is. And certainly, I'm not discussing uber premium luxury brands like Mercedes Benz, Audi, BMW, etc here. It was like no other in the industry. And the first impression is the last impression. Perhaps, this was one prime reason why people were enchanted with Honda City. And the uber refined petrol engine further added cherries on top of the looks. Honda still owns the crown of the extremely refined gas engine in the segment and even above it. I guess the legend is not completely lost with Honda keeping the same engine refinement. 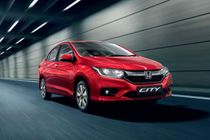