Mercedes Benz is the oldest player in the luxury car market of India. With the arrival of German rivals like Audi and BMW, the carmaker started to lose its pace. Mercedes than followed its strategies such as ?Year of Offensive? and ?Year of Excellence? which cemented its footprints in the market. And born out of these clever strategies was the new C-Class sedan. The aim was to localize the content and extend its reach as much as possible. The popularity of this car comes from its dashing looks which appear strikingly similar to the elder sibling S-Class. And hence, it?s no surprise many call it a mini S Class. The automaker has used a good amount of chrome across the body which gives it a delicate edge of superiority. The shape is sturdy and curvaceous at the same time. The exteriors boast of LED headlamps with the cluster giving space to LED daytime running lights and fog lamps. The car features panoramic sliding sunroof, electrically foldable mirrors, and high ground clearance. The interiors are also refreshing with one of the best cabin layout in the business. And the main highlight of the cabin is not the layout and the equipment level but the quality and finishing which has a striking resemblance to the S Class. The grain of wood on the dashboard to the power window switches, everything speaks of luxury. Among other comfort things, one gets steering wheel with paddle shift gears, electrically adjustable front seats, rear 40/20/40 split, a high-resolution touchscreen multimedia, satellite navigation, reverse camera among others. The most alluring thing to my liking is the tachometer and speedometer which are nicely placed inside an oval housing. The car sources its power from either 2.0L 181bhp petrol or 2.2L 168bhp diesel engines, both which are fuel efficient as well. Overall, this made in India C-Class scores well on all quarters and at the starting price tag of Rs. 40 lakhs, it is one of the best choices of not only executive buyers but a darling of young elite buyers who are looking for a mini version of the S-Class. 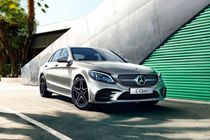