The Porsche has made is debut in the electric market by introducing Taycan with its two variants that are turbo and turbo s. Taycan has started giving tuff competition to Tesla`s model s and model 3 in aspects including aesthetics, fit and finish except the range and Price only. the company has quoted the WLTP range up to 280 miles but the actual EPA range that has come up from the US itself is measured to be 201 miles only. The Porsche has sold its first Taycan in the US this December itself and expected to start selling in India from March 2020. Taycan has been designed on driver satisfaction view and the rich touch panel makes it look a real Si-Fi car. more details about the car are listed here: - * Range Indicators -tells about how much distance the car can cover in the then charged state * 2-speed transmission for maximizing the pickup of the car * adaptive air suspension and optimum aerodynamics *regenerative braking-it means the car itself generates energy while running on the road * 4-point LED headlamps that generate a floating look of the beam conclusion: Pros are: there is no compromise in luxury, the sports car is more like a whole combination of gadgets on wheels Cons: the price is much higher than tesla`s cars and the driving range is less compared to tesla`s. 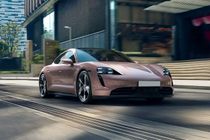