Before making the purchase, I have thoroughly researched all the SUVs in the segment. Though, I also liked the Acura and Volvo. But, Lexus NX is beyond the competition. It's the premium feeling of the NX that held my interest. Shifting gears with paddle shifters is engaging and gives a responsive and high-end performance as you change the gear. Also, what influenced me further is its the NVH levels are the lowest in the segment. It means the cabin remains silent even while driving on harsh Indian roads. With its dynamic looks, I think that it's one of the SUVs in India that steals the show. 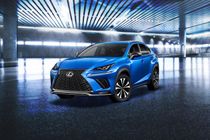