Mini Cooper Countryman Best of Both The Worlds

Call it an SUV or a compact crossover, the practicality of this car is never compromised. It also serves the purpose of being a three-door hatch for those who want space. I was going through the second generation Mini Countryman at the Auto Expo 2018 and I found it to be a more XXL Countryman than the previous ones. The company claims it is the most multipurpose model it has ever rolled out in its 58 years of history. It is based on the popular BMW X1 platform. Though visually, it is still recognizable as a Mini, but sets its own distinctive image from the current fleet of Minis. For instance, the headlights and the taillights are square shaped and there is more aggressiveness on the inverted grille. And the most unique aspect is that the rear part of the roof is twisted, just to give it its own individual character. Inside, the Countryman is similar to other Minis with the state of the art 8.8inch touchscreen infotainment, sporty instrument cluster and Harman Kardon music system. When it will be launched, it should provide the best of both the worlds, off and on road. As usual, expect this one to come with a steep pricing starting at around Rs. 40 lakhs. 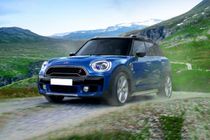