Excellent reliability no doubt. Best in the segment according to the relatability. But this car is only for the reliability purpose according to me. It has all the needed features it is fully loaded no doubt in it also has a powerful engine. But you are paying around 35 to 40 lakh rupees and not getting a sunroof. Its main rival Ford's endeavor has a powerful engine in it has more features including a panoramic sunroof. If you are buying a car only for the reliability purpose than go for the Fortuner. But according to me, Ford's reliability maybe not as good as Toyota's but it is not bad too. Fortuner may have more mileage than Endeavor but you are paying 40 lakh rupees and giving more emphasis on the mileage part and ignoring powerful engines and loads of features is not a good idea. Fortuner may be good for the off-roading part and I accept that but endeavor is also not far behind it. In my opinion, if you need a car only and only for the off-road purpose than close your eyes and go for the Fortuner 4×4 and if you think that you will go off-roading occasionally and your car will drive more in the city than go for the Endeavor. 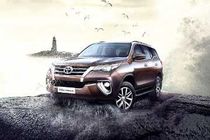