I own a 2015 model XC60, beauty of a car really attracts, I was also attracted by its beauty and features. It's the worst car one could own. Mine is the D5 AWD version you feel the power in your feet while driving though initial punch is missing which we feel in German rivals. But as you cross 50000 Kms it becomes a money guzzler. At 80000 both of my front Axles gone and at 90000 rear differentials replaced. At finally the golden moment at 120000 when the engine seized. Resale of the car is so bad its difficult to find a buyer for it. 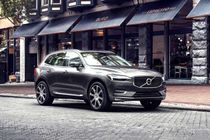