What an entry from the hot favorite car company, Mahindra Auto maker has made, with the launched of Mahindra Thar in the AC version. Already the heat is firing out in the Indian four wheeler market and the hot summer of India is right on its peak. Mahindra knows the mentality of the consumers and it?s been right time to strike the door of the Indian car market. Company had already launched the Mahindra Thar which is selling out at a higher point and now company brings the AC version of the Thar, which will definitely explore the heat on the Indian roads because its been the summer time and Indian buyers wants? to feel a cold during the hot month, and Mahindra brought the first Jeep in AC version. I am going to book a test drive right now because I m willing to ride this powerful 4 x 4 racer car. What a perfect car for the buyers to enjoy the ride of this car. Company has revealed out the Mahinda Thar AC price at around Rs. 6.86 lakh(ex-showroom New Delhi). I love to ride the jeep on off roads and especially if Mahindra is giving this opportunity of AC in jeep is been fantastic because sometime while driving the car user became tireless and wants refresh air so AC is need there. Well I am a big fan of Mahindra cars because of features and power they provide in their cars is awesome and Mahindra is recently the king of the four wheeler market especially in SUV segment and currently their Mahindra SUV 500 car breaks the all records of sells. SUV 500 is a class of design. Mahindra had already proved it with the launched of Mahindra Bolero in the Asian market and the jeep is also been upgraded and launched with new features. Bolero is hit in the rural areas. Accesories of the Mahindra Thar ac version is well packed with the 2.5-lite Common Rail diesel engine (CRde) which is capable of pulling out a peak power of 105 BHP at 3800 RPM and a maximum torque of 247 Nm at 1800 RPM. If you are a good lover of riding the jeep while off roading then this jeep is the gift by the Mahindra to play with it because of its powerful pick up, features and great suspension makes this a perfect choice for me. I will not wait for long and even you should not miss the opportunity to take a ride of this rough and tough car. 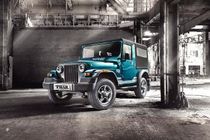 Can any one tell me the comfort for family.

Can any one tell me the comfort for family.

Tough vehicle with ehough features for off roading... Engine is good this SUV has a good street presence overall