Having seen enough, I moved on to the last row of seats, with my friends occupying the centre seats. The seats were decently comfortable unless we folded the middle row seats. But once folded, their hard board back started rubbing against my knees and I found it difficult to be inside for more than a minute. The seating position was no better and with my knees facing skyward and my head touching the roof (Oh… forgot to say…I’m 5’10” long and average built), it was like a nightmare. Happy to find a couple of cup holders in the rear seat like in Innova, I tried opening them. It was as if they didn’t want to be opened and they protested by opening in a way similar to the creaky doors in ghost movies. The only good point I could find was the generous outside visibility, even at the third row. Also I was surprised to find a side window defogger, but only on the side opposite to the driver, maybe to help his visibility while parking. Overall, we came out of the car with mixed bag of emotions. All of us were unanimous in our feelings. The car though loaded with features and equipments, has terribly let us down. The expectations of finding an exponential rise in quality, like from Vista to Manza was thrashed, and finally it all came down to one question. Is this car the sort of value for money that we have seen in cars from the Tata stable? 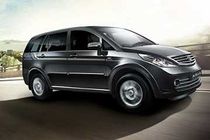 Next month i want to buy a car in india. so i m keeping aria also in my mind.seems good.

Rear the full review at en.wordpress.com/tag/automate4u/