The XC90 T8 Excellence is the most expensive Volvo to date.The T8 Excellence as an XC90 offers a whole experience. The T8 in this XC90s name signifies that its a plug-in hybrid while Excellence speaks of luxury. The XC90 Excellence is the first car in India to feature radar-based safety systems like collision mitigation with autonomous braking.this XC90 special is actually hidden from outside view. Volvo calls the T8s setup Twin Engine and it really is that. Under the bonnet sits a 2.0-litre, four-cylinder petrol engine. Its a supercharged (for low-end responses) and turbocharged (the turbo takes over from the mid-range on) unit, making a strong 320hp and solely driving the front wheels through an eight-speed automatic gearbox. The second source of propulsion is an 87hp electric motor that sits atop the rear axle and powers the rear wheels only.This space-efficient arrangement is a result of Volvo developing the SPA platform that underpins XC90 and S90 from ground-up with full electrification in mind. The battery can be fully charged by plugging it into a 220V wall socket.Its a Great Car. 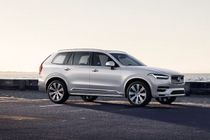