Nissan Kicks The Trendsetter Has ArrivedBut

Since I have been following updates about Nissan Kicks for a long time, I would like to write a short review on how I feel about this car. The new compact SUV from Nissan launched at Rs. 9.55 lakh is a special one for so many reasons. The car is based on Renault-Nissan's low-cost alternative platform MO which is meant for developing markets and the same platform from which Terrano, Duster, and Captur have been carved out. The car is available in both 1.5L diesel and 1.5L petrol engines both of which have been tried and tested. I liked the way the carmaker has bestowed this car with oodles of comfort out of which some segment first including a 360-degree camera and leather covered dashboard. Other notable comfort features in the car include rain sensing wipers, automatic headlamps, cooled glove box, climate control, quilted leather seats and 8-inch touchscreen infotainment powered by Android Auto and Apple CarPlay. On the safety front too, this car scores well with standard features includes dual airbags, ABS with EBD, rear parking sensors and rear defogger. The top end variants get additional 2 airbags, rear fog lamps and hill start assist. The car has been pretty much equipped. Like its sibling Renault Captur, the Nissan Kicks also gets tons of single and dual color paint options. But! Will it be able to beat Creta since looking at the fact that it is only available in a manual transmission? I think the car would have a hard time getting things right for itself. Automatics are increasingly being preferred by new car buyers and lacking this vital option would surely distract many buyers. Also, Nissan should have added other vitals such as the sunroof, powered driver seat, wireless charging and other cool features to make this car stand shoulder to shoulder to rivals. On the other hand, what I liked the most that the car has been priced sensibly with the top end model available at Rs. 13 lakhs, unlike Creta which is exorbitantly priced. So from a pricing perspective, it seems Nissan Kicks will directly rival Maruti S-Cross in the segment. To me it seems this car is a mixed bag, rest time will tell how people take this car. 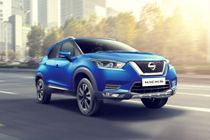