Buying your first car at this age is really a terrible job given the amount of competition in the auto market. Four months back, I started searching for a city cum off-roader in the price range of Rs. 12-14 lakhs. There were already a lot of options in the form of Renault Duster, Hyundai Creta, Nissan Terrano and Mahindra Scorpio. Since Scorpio was not my cup of tea, the competition was now between the other three. I opted out Renault Duster since our family already had the 2013 Duster. Now the only choices remaining were Creta and Terrano. Creta was well equipped but I didn't like the way it was unnecessarily hyped and I also didn't like the design. So, finally the decision for Terrano came after I had the test drive of the car. I got quite an updated model as before purchasing, the company launched a new version just six months back. The exterior styling of the car is awesome since I own the Sports Edition which is really a head turner. While the interiors have been given prominent changes such as two-tone black and brown colour scheme, a redesigned dashboard, new instrument cluster, cruise control and the much needed 7-inch touchscreen infotainment unit. In terms of performance, since I had the opportunity many times in the past 4 months to take this car for long drives, I can give you an account of its capability. In short, the car is outstanding while driving in urban conditions with least turbo lag and minimum gear shifts. The feedback from steering, clutch, and gears have been nearly perfect. Mileage on highways on moderate speeds has been around 19kmpl which is excellent given the size of the car. I can bet handling, suspension, and ride quality must have been the unique selling point of this car. The 205mm ground clearance is fantastic and the car gives well balanced and planted ride quality. Driving over 3000 kms, I can say it's one of the best cars I have driven so far. However, what Nissan needs to think over seriously is their after sales service which is sub-standard and need to be improved thoroughly. 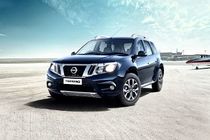