Tata is about to launch one of India?s most awaited car of the year 2019. Auto enthusiasts and everyone with a slight knowledge of the cars are sharing their opinion about Tata Harrier with auto websites continue to post random road tests stuff. The most striking part of this car is that it uses Land Rover platform that lends it an aggressive styling, nice build quality and absolute road presence. In terms of features, though the car has been loaded up to the brim, many people out there seems to be obsessed with the lack of ?sunroof? with majority of them complaining about it and comparing it with other cars in the same segment. But I have completely different opinion about this. I own a Hyundai Creta and my brother has Honda WR-V. And believe me, since we purchased the car, I don?t remember when we have used this feature. India is a country where there is no spring and autumn season and almost 9 months we get clear sunlight with 4-5 months being the blistering ones. So, in my opinion sunroof in the car is practically a useless feature. You can call it a marketing gimmick or something else but according to me it isn?t a deal breaker and it?s like fooling people by adding useless stuff. Moreover, given our road conditions, the feature of sunroof can actually prove life-threatening in some cases. We have many such road mishap cases where people especially young kids injure while standing. So according to me we should think more practically rather than fascinated by marketing gimmicks. I appreciate Tata Motors for giving preference to safety over feature. I think what?s more important is how Tata prices this car. It will definitely undercut its immediate rival Jeep Compass while expected to slot above segment best-seller Hyundai Creta. If it does so, it would be a great start for this vehicle. 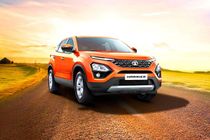