Best car in the Sedan section

I am Vitthal Chavan, a Bank Employee, from Sangli Region. Considering small family and occasional use of the vehicle i was preferring small segment car i.e. hatchback car. My office is near to my home and office is providing me vehicle for my work duty. Just for family use, I was searching for car of comparatively low budget car. I was willing to buy a Hatchback car, at initial period Car Dekho was the best option for me to compare the cars in those section. I searched for Maruti Swift car as it was widely accepted and trusted by the buyer. Car Dekho also gave me the options to compare the cars which are also widely accepted in that budget segment. The comparison with other cars such as Hyundai i20 and Toyota Etios. Car Dekho helped me to have overall information and comparison of the cars which I have chosen. Ex showroom price, On road price, performance of the car, engine capacity, mileage, suspension type, dimension of the vehicle and so on. Car Dekho really helped me to have a deep information of a car. Later, after taking test drive of both the cars Swift and i20. I slowly started to search on Car Dekho for compact sedan cars for luggage purpose. Though my family was small, I had to travel to my home town, which is 450 kms from my work place. I started searching for Maruti Swift Dzire, I prefered Maruti Car since, it is having a very strong network not only in Cities but also in rural area. People belonging to all segment of economy are preferring Maruti Car. Then again the search and comparison started in Maruti Dzire, Hyundai Excent and Honda Amaze. This time it was more confusing, which car should I buy. Dzire car is also widely accepted, new model of Honda was launched Amaze. My wife used to literally shout at me as I was just lost in searching, comparing cars viewing it online on Car Dekho after my working hours. Kilos of pamphlet, brouchers of various cars were kept in my drawer. In that period, I got promoted in my personal life as well as in my professional life. After getting promotion in professional career, I started comparing the Swift Dezire with Maruti Ciaz on Car Dekho. Later, I took test drive of Maruti Ciaz and to my surprise, it was the best car launched by Maruti Company. But, I was reluctant in booking it due to comparatively high budget as compared to Swift. But, after test drive I became greedy of purchasing the Ciaz car. Every day I was looking for positive aspect of Ciaz car over Swift car to change my mind. During that period, even if someone asked me in my sound sleep for details of any car of Maruti, Hyundai and Honda, I would have told him complete details of the car starting from ex showroom price, engine capacity to boot space. Later, I started comparing Ciaz with Honda City. But the budget of Honda City was high and also as told earlier, Service Centre of Maruti is available in rural areas also which gives us comfort level. On 1st July 2015 I was seating with Marketing Staff of Honda Company for knowing the reason to buy the City car over Ciaz till 10.00 pm and on 2nd July 2015 I was seating with Maruti Marketing Staff for the reason to choose the Ciaz car over City. After lots of discussion, on 3rd July I made my decision to go for Maruti Ciaz. My Mom's birthday is on 11 July and I was very keen to purchase the vehicle on that day. Now, the problem was whether to book Diesel Model or Petrol Model. The said confusion was cleared by Marketing Head of Maruti Car. He was just very calm and quiet and has asked me lots of question such as my purpose to buy the car, my daily use of car and so on. He then suggested me to go for petrol car depending on my daily use of car. On 10 July I made payment of car and got delivery of car on 11 July. Now brief about car after driving it for 1.5 years:Style: AwesomeLeg room: Best in the classAccess to various features in the car while driving : GoodComfort: Best for both seats (front and rear)Driving experience: Very smooth and non tiring. My dad at the age of 59 years, drive the vehicle from Sangli to Nasik (450 kms) without any complain of body ache.Performance: I am getting the average mileage of 19.2 kmpl for petrol carServicing point of view: Free pick and drop facility available. Online payment mode is available for payment of any accessories purchased at the authorized point. Ground space : I belong to farmer community and while driving on off road i.e. kutcha road, ground clearance does not make any problem.Boot space: Fantastic. IMP: After I purchased the Ciaz Car, my office colleagues also booked Ciaz Car. And now @ office parking 6 CIAZ are standing daily.Thanks to Maruti 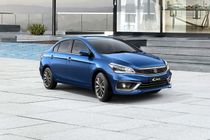 nice detailed review. iam also a car crazy person like you most of the time i spend in test riding cars obviously. i wanted automatic car with a cruse control. i went for test ride of vento priced 16 to 17 lacs. verna priced 16 laks both diesel automatics. awesum cars but highly priced. i cked ciaz petrol auto delta comes for 11.5 laks. the top end i had a test ride got a mlage of 22 per litre.

After reading your experience regarding ciaz i finally madeup my mind togo for it .Till date i was in confusion whether to go or not.

Your indepth review was pretty helpful

Exchange your vehicles through the Online ...