A good and reliable workhorse

A good and reliable workhorse

I have been driving a tat safari 2.2 vtt dicor for the last about 08 years now and have done about 110000 kms on it. this tata stable workhorse has never let me down and has been a loved family car for almost a decade. To review this car is simple: value for money with no frills. My safari has been driven to places where faint hearted don't dare venture. This beast does not need a road to move, it just sails like a boat on any surface. My children have continued sleeping in the middle seat even when the car was negotiating unpaved mountain streams. A consistent mileage of over 13 with AC has been my experience with this hulk. The ground clearance of safari makes it virtually an all-terrain vehicle and coupled with a solid suspension a comfortable long distance speed. The upholstery, music system, LCD screens, reversing camera and the matting have lasted me over eight years with no complaints. The best part of driving this SUV is the visibility and high seating which gives an imposing view of the road. The cost of ownership when compared to other similar vehicles are quite low and the period between servicing is sufficiently large even for those who stay in small towns. For a vehicle of its class and at the cost at which it is offered, this SUV has a far better service life and beats its competition hands down. To mention a few things which may be added by tata are:- a navigation system , an arm rest cooler and a few more cubby holes. The plastic of the cabin though is sturdy could be given facelift. The spare parts availability and commonality with other cars in tata lineage has been gud but service centre response is one aspect which needs refinement. Technicians at TASS have still not achieved the standards desired from a modern customer service chain. Bigger issues, if any, are handled well but the niggles like creaks and grunts are not addressed until coaxed. Most of the problems which people face with this car is due to non adherence to servicing schedules as laid out. TASS technicians also do not follow procedures as written in the manual and take shortcuts whenever possible. Aggressive marketing and selling gimmickry have not been tata's modus operandi but a few camps or health checkups would be welcome. To sum it up my 13-year-old doll has given the verdict don't change the car and if u want to, buy me another safari. 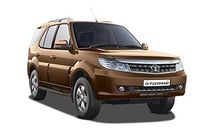 Hey There, Have you driven any car other than safari?